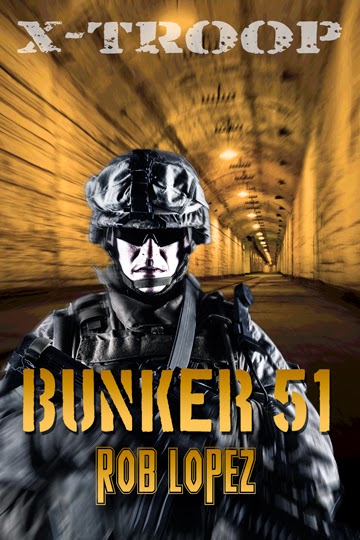 The next book is out, and the badness just got badder! And I don't mean the book is bad, no. I mean... ah hell, you know what I mean.

Look, it's the situation the characters are in that's bad, not the book, alright? Sheesh.

So what can fans of the series expect? Well, tons of action. In fact, I think the action quotient for this book is the highest in the series so far. That's a lot of cap-banging, alien-slotting (oh yes - and no, that's not what you think it is), knife slashing and knuckle bashing. The alien plot to take over the world is in full flow, and X-Troop are fighting hard to save the day. But it's not all violence and uncouth behaviour (though most of it is). Alex gets to meet a living icon (of sorts), Dolores finds she has an admirer and Sergei displays his maternal instincts.

Bunker 51 is a top secret facility deep in the Nevada Desert and X-Troop is approached by the US government to check it out, as they appear to have lost control of it, but they're not too sure what they've lost control of it to. Is it an escaped alien? A bio-engineered virus? As they venture deep underground, X-Troop are about to find out what the authorities have been hiding in there - and it really, really isn't good. I mean, really.

Familiar at all with the Resident Evil games and movies? Well, my lawyer informs me that this book bears no resemblance whatsoever to those works. None at all. I mean, really.

So why are you still reading this? Get clicking now!