Nobody's supposed to like dystopia. The very idea of wrack and ruin is meant to have negative connotations. Chaos and destruction are things we should be avoiding. It's not meant to be beautiful. Yet the imagery and the art of it draws many, myself included.

Dystopia is like a Great White Shark. No one wants to get in the water with one, but from a safe distance, they look awesome.

Maybe it's because we live in a safe society, with rules and limits. Maybe, from our safe zone, destruction and chaos holds a grim fascination. Maybe we are drawn to opposites, the way we are drawn to read horror, for instance. Or war.

People read, watch or play fantasies. So it's strange that dystopia should be one of them. Maybe nihilism runs deep through the human psyche.

In the 19th Century, it was very fashionable for wealthy English lords and ladies to travel to Venice. Britain was then at the height of its power, with an empire that spanned the world, while Venice was the home of a former power that had fallen on hard times, and had been in decline for centuries. There's a brilliant piece in Susanna Clarke's book Jonathan Strange and Mr Norrell, where the opinions of the privileged visitors are satirised:


They thought the façades of the houses very magnificent - they could not praise them highly enough. But the sad decay, which buildings, bridges and church all displayed, seemed to charm them even more. They were Englishmen and, to them, the decline of other nations was the most natural thing in the world... they would not have been at all surprized to learn that the Venetians themselves had been entirely ignorant of the merits of their own city - until Englishmen had come to tell them it was delightful.

In Britain, peasant farmers and landowners alike pillaged and destroyed the remains of Roman bathhouses and villas. Hill forts were ploughed over and medieval castles were dismantled for stone. In Shrewsbury, Thomas Telford, the renowned civil engineer of the Industrial Revolution, drove a road straight through a wing of Shrewsbury Abbey without really worrying about its structure. Vast swathes of history were lost in this way before preservation orders came into being to protect them.

The Industrial Revolution's own history turned to trash in the area we now know as Ironbridge Gorge. For decades the area was just known for its slag heaps and overgrown ruins, and it was considered an eyesore and a dump. Then they built the new town of Telford (ironies abound) nearby and set about clearing away the growth and turning the ruins into another tourist attraction.

Maybe it's nostalgia rather than nihilism that elicits our fascination with ruins. Modernists certainly thought so, and they had no time for looking backwards when they preferred to look forwards. Science Fiction used to be modernist, with its depictions of fantastic future societies, new ways of living and even new ways of being. People say Mary Shelley's Frankenstein was probably the first true science fiction novel, but the Positivist trend of science fiction at the height of its glory in the sixties and seventies actually reaches further back than Mary Shelley - right back indeed to the 16th Century novel Utopia, by Thomas More. Utopia is the opposite of dystopia, and science fiction ran with this, driven by the Enlightenment belief in Man´s ability to improve itself.

Which is also ironic, since Utopia, like the writings of the philosopher Rousseau that followed two centuries later, is actually a throwback to some Arcadian past that never happened. But I digress.

Mary Shelley's novel runs counter to the humanist, positivist beliefs that underpinned much of science fiction, and drops a dystopian stone into the utopian well, listening to its echoes. Her novel explored the folly of Man tinkering with technology, and life itself. In Christian myth, it was God who created life. Shelley wanted to show what happened when Man usurped God.

Mary Shelley was the opposite of a Humanist. She was a Romantic, which was a loose title for a group of poets and philosophers who were sceptical of the Humanist power of reason, or of Man's power over nature or destiny. Humanism gave us Hitler and Stalin. Romanticism gave us hippies and Environmentalism. Western society has always been a curious mixture of these two opposing strands.

If it was Humanism that gave us science fiction's galactic empires and experimental space societies, then it was Romanticism that gave us the Post-Apocalypse. And Zombies.

It was Mary Shelley's husband, Percy Shelley, who wrote Ozymandias, which tells us of a fictional traveller who discovered the remnants of a stone statue alone in the desert:


And on the pedestal these words appear:
'My name is Ozymandias, king of kings:
Look on my works, ye Mighty, and despair!'
Nothing beside remains. Round the decay
Of that colossal wreck, boundless and bare
The lone and level sands stretch far away.

Ruins are thus a powerful way of reminding us of our own mortality, and of the fragility of civilisation. And if that's a Romantic thought, then maybe I'm a Romantic. I'm fascinated by the fall and decline of societies, including the one I'm living in. I'm drawn to ruins and the stories they can no longer tell.

Outside Dover, a series of underground forts lie in decay. Built during the Napoleonic Wars by French prisoners-of-war, they were abandoned and left to rot. I had the chance to explore some of the tunnels, and to me they were as magisterial and mysterious as cathedrals. 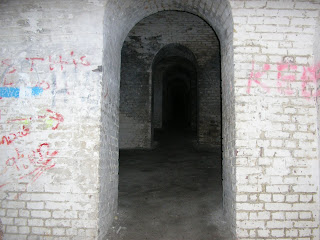 If they had been properly lit, repaired and turned into a museum, I wouldn't have been as awed as I was the day I felt my way along the spooky, echoing tunnels. I've always been drawn to the illicit exploration of truly abandoned places, untouched by civilised attempts to preserve or gentrify them. I once read an article about a man living near the Normandy beaches in France, who collected the rusted carcasses of tanks, some dragged up from the sea, and displayed them at his home near the beach. I would have loved to explore their deteriorated, and still deteriorating, remains. By contrast, I once visited a tank museum where many remnants from the war had been cleaned up, repainted and displayed for visitors to see. It was a boring experience (and I love tanks), as the vehicles on display seemed artificial and ripped from their actual context. They were like models. So for me, it's not just historical nostalgia. The raw unsanitised feel of history, the sense of something once real that was now lost, is almost a spiritual experience for me. This is how I've felt when I've walked through the wooded remains of hill forts, feeling the presence of the Celts who once dwelt there. This is what I felt when I explored old airfields, imagining the Spitfires on the runway, and the maintenance crews in the ruined workshops, having a cigarette as they waited for the planes to return. It was what I felt walking through the deeply worn paths of a medieval quarry, in the footsteps of the masons on their way to work.

Imagination plays a large part in this fascination, I suppose, and I prefer to imagine the history myself, rather than have someone do it in a museum with plaques and dummies. Maybe that's why I'm a writer, rather than a curator of antiquities.

Dystopia has carved out a large swathe for itself in fiction today, with post-apocalypse wastelands and nuclear or biological catastrophe delighting millions. One of my favourite games of all time is the Fallout series, set after a nuclear war, where you explore the devastated wastelands, encountering mutated creatures and ghouls, and embarking on quests among the surviving settlers. If I didn't have a life, I'd probably spend way too much time in those wastelands, checking out spooky places and picking over the remnants of modern society. As it is, it's addictive enough, and the game's designers understand well the attraction of exploring decay, so I know I'm not the only one who feels this way. In real life, there's a whole bunch of people who call themselves Urban Explorers, addicted to the exploration of abandoned buildings, ships and tunnels.

What makes decay beautiful? I don't know. Maybe it's the setting: the solitude of being alone in a place that you know was once busy. Maybe it's a fascination with seeing the effect of time itself, which reminds us that everything is in constant flux and that nothing, not even us, is forever.