UNDEAD UK Locations: The Town With No Name 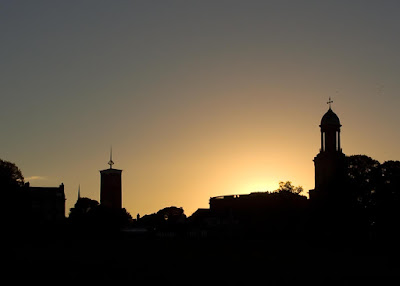 There is a scene in Remember Me Dead where Breht, floating downstream on an improvised raft, passes through the centre of a town, catching fleeting glimpses of Gothic church steeples, Edwardian school buildings and Victorian arched stone bridges. Drifting round a bend, he sees a park with the remains of a medieval town wall and a statue of a winged angel. The park slopes down to the river, and at the top of the slope a grand circular church with a bell tower dominates the skyline. A single guardian with a shotgun stands atop the bell tower, warily watching the undead who wander aimlessly across the park.

This is the point at which the reader is introduced to a town rich in Victorian, Edwardian and Tudor history, but at no point in the story is the town actually named. Did I make it up? Is this town a figment of my imagination?

No. The town in question is actually Shrewsbury, located in the West Midlands, near the border of Wales, and it really does contain a storehouse of living history that stretches back over five hundred years. It is famous for the sheer number of 15th Century black-and-white timber framed buildings that still stand on original medieval-plan streets.

So why didn't I actually name it? Well, one reason is that I wanted Breht to fight his way from the river, through the town and to the castle at the other end, and there's a credibility problem with that idea if you look at an actual map of Shrewsbury.

Shrewsbury was built within the horseshoe loop of the River Severn. Breht floats in from the west and navigates the loop. The castle he wants to get to, however, was built at the neck of that loop. Anybody who understands history knows that castles tend to be built by rivers. In ancient times, rivers were the highways of civilisation, so controlling them was important. And in the story, if I had portrayed Shrewsbury as it actually was, Breht would have seen the castle from the river before he got anywhere near the park. And if, by some chance, he happened to miss its significance, then he could have continued to drift downriver until he passed close to the castle on the other side. At the circular church (which is at the southern point of the loop), he learns of a pressing reason to head to that castle. What he should have done then is scampered back down to the river and floated onwards. He'd have got there in minutes.

But that would have made for a pretty short book, and besides, I needed him to fight through the zombie infested town.

I could, of course, have just given the town a fictitious name and stolen all the features of Shrewsbury that I wanted to use. But in the end I didn't bother. It was never important to Breht to know the name, and some zombie mayor was hardly going to come out and welcome him to the town, really. So it just became an anonymous slice of English history, festering with zombies and thrown down into his path. And not naming it did give me the liberty to stretch the geography a bit.

The real town of Shrewsbury probably began life an an Anglo-Saxon settlement, although historians are not really sure of this, since archaeological evidence for this isn't exactly abundant (meaning, there isn't any). We don't know if the Celts had a settlement there, though there have been attempts to link Celtic language with the town's current name, but to be honest, it's a stretch. The occupying Romans certainly didn't think it all that significant, since they chose to build the city of Viroconium several miles down the river, and the city remained the capital of the region, even after the Romans left in 400AD.

Viroconium itself, however, fell into ruins (and was forgotten and lost for centuries), and the newly arriving Saxons may have chosen to build a settlement and fort at Shrewsbury. We don't really know. What we do know is that after 1066, William The Conqueror built a motte and bailey fort on the site before sallying off to fight the Welsh. Shrewsbury would remain on the frontline of the war between the English and the Welsh for centuries to come, and the border region it guarded would become known as The Marches. It went on to become a successful market town, hosted King Charles I when he was recruiting loyalists to fight Parliament in the Civil War, and was eventually taken by parliamentarian forces.  The town remained notable and well regarded, providing Queen Victoria's empire with famous (for the time) generals and adventurers. And Charles Darwin was born there, though he later left. After the industrial revolution, the town's importance dwindled until, at the end of the 20th Century, it became a largely unknown place - a rural town that you passed on the way to the beaches and mountains of Wales for your holidays. And since I grew up in the industrial East Midlands, and never holidayed in Wales, I'd never heard of it until recently. 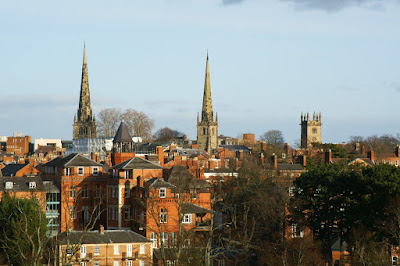 So why did I pick Shrewsbury? Well, it has a river link to Wales, and a rail link to Conway Castle, which also features in the story. But the real reason it that it's just an intrinsically interesting location for a zombie apocalypse - at least for me, anyway. As someone with an abiding interest in history, it seemed a shame not to use it as an interesting backdrop to a zombie apocalypse. Most zombie movies that are set in Britain tend to focus on London. Where the survivors are shown outside London, you usually end up in some random rural building that, to be honest, could be anywhere. You would be forgiven for thinking that, outside the well known metropolis, there is nothing worth knowing or exploring in the rest of the country. And indeed, there are a lot of people in Britain who think that way. Anything outside the capital is considered dull, rural or simply unimportant. In zombie books, there's only Frank Tayell's Surviving The Evacuation series that I know of which deals seriously with multiple actual locations in Britain, although the first book in the series, London, does centre on the capital (the clue's in the name, really) to the exclusion of everything else. Actually, I enjoyed reading London, and will probably review it here when I can get round to it. But I digress. Anyway, I think there are tons of fascinating locations for a zombie outbreak, and I intend to cover many different ones in future sequels. I have often been impressed by how US zombie apocalypse writers focus on small towns and cities that nobody outside Hollywood has ever heard of (Charlotte in North Carolina seems to feature in a surprising number of books. Is there a burgeoning zombie industry there?).

So let us return to Shrewsbury, where Breht leaves the river to traverse a zombie ridden park, his gaze set on that strange circular church. The park is actually named The Quarry, which is what it used to be before it was landscaped and made pretty by the Victorians. And the church is St Chad's, which is what it is called in the story. 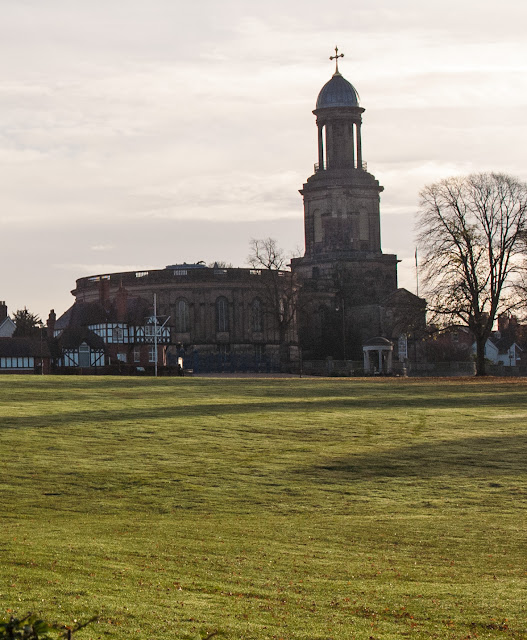 St Chad's really is a circular church. Originally, the people of the town wanted a normal church shape, but a lack of communication led the architect to create a circular structure, making it unique. I have no idea what kind of error would lead a designer to make a round church when the bishops wanted a rectangular one, but there it is. Maybe alcohol was involved. But the church got built in 1792 and remains in good condition to this day. Charles Darwin was baptised there, and attended services as a child, and the graveyard was used for filming a pivotal scene in A Christmas Carol with George C Scott in 1984. The gravestone shown him by the ghost of Christmas future, with the name Scrooge inscribed, is still there. The film makers got permission to engrave a real gravestone that had been weathered smooth, and then left it there. 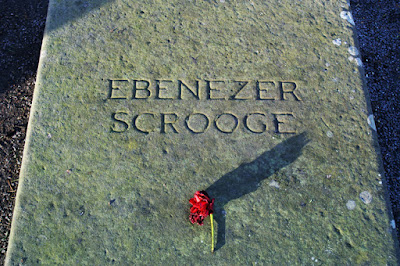 Inside, the circular nave is a modest size - this is no cathedral - and the graveyard is fenced and walled, though in the story I've made the fence a little bigger. I think they still perform regular services there (I never checked) but it's open to the public during the day, and worth a visit. You can also see the colours and battle honours of the King's Shropshire Light Infantry, which has since been disbanded.

The town centre itself is an incongruous mix of old and new, as are most towns and cities in the UK, but the history is more ostentatious here, and much older. Intrepid tourists will find cobbled alleyways and streets nestled away, and even the McDonalds on the main street has a downstairs seating area that dates back a few hundred years, with the wooden beams left uncovered.

Shrewsbury library is a magnificent sandstone building built in 1450, but it used to be a private school where Charles Darwin was educated. The wooden benches in the upper rooms still bear the engraved graffiti of pupils from the period. The library that Breht enters in the story, however, bears little resemblance to the way the library looks today. Nor is there a tunnel leading to a church. The library is actually opposite the castle, but I moved it and put the fictitious church there instead - artistic license.

The castle that is ruined in the story is still intact today, with a military museum housed in the old King's Hall, which is also the keep. It's not a substantial castle - the walls and crenellations are thin compared to other fortresses of the day - but there is a mound and tower that is accessed from the inner bailey. The tower is actually a modern introduction. The original mound raised by William the Conqueror collapsed into the river, and in the 19th Century the mound was rebuilt, and a tower erected, named Laura's Tower, in honour of somebody's wife. It's a folly, rather than a military structure, with a Gothic feel, but the view from its little courtyard is pleasing, and it's a fitting place for Breht's final scene in the town. And okay, in the story it's not close to the river where a castle should be, but you can overlook that, can't you?

Well, you could until I pointed it out to you, but it's going to bug you now, isn't it?