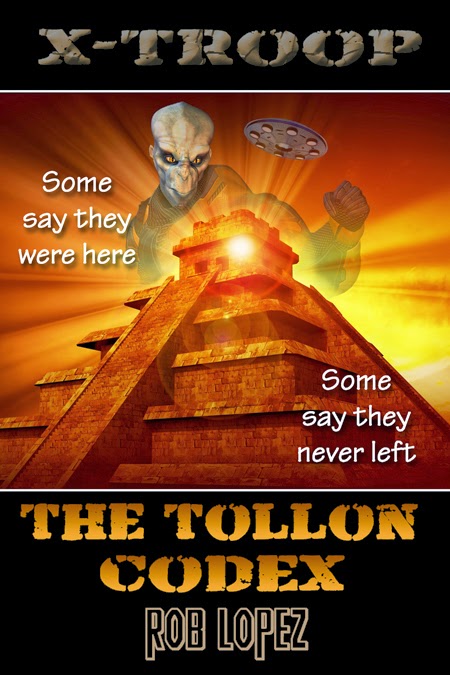 It's out! The third exciting installment in the X-Troop saga, and it's just wall-to-wall action as Alex Harvey and the boys go hunting for aliens in Guatemala, picking up some Mayan legends on the way. And did I say Alex and the boys? Because there's a girl in this one as X-Troop gets its first female recruit.

How much should I give away? I don't want to ruin it for you by blabbing out the spoilers, but I just gotta, gotta, gotta say something.

And yes, I am excited.

Okay, I can mention a couple of things. You know the ancient astronaut theory, where aliens were supposed to have visited us in the distant past and showed us how to make the pyramids and all? That makes an appearance in the book, which isn't giving too much away as it's implied by the cover, but there's also more. Have you heard of King Pakal's sarcophagus? Or the tree of life? How about Tohil, the obligation of blood and the Tzitzimime? Or the history of Guatemala itself? Okay, I didn't exactly write the Encyclopedia Britannica here, but as well as the bone crunching punches and the rattle of machine gun barrels, isn't it nice to have a few things of local interest?

No? Okay, how about banter and the relationship between the characters? Because Alex, Cole, Moyles and Ray haven't lost their dry wit or their stock of one-liners. But there's a treat in store as we get to add Dolores and her own brand of southern Californian humour, plus a certain amount of incredulity as she struggles to understand the crazy Brits that she's working alongside.

The story is billed as 'The X-Files meets Call of Duty' (and yes, I do have the cheek), and it's Alex and Dolores that get to play Mulder and Scully as they work to solve the mystery in their own, inimitable fashion. Actually, I never watched the X-Files (though I did see the movie), so I don't know a whole lot about Mulder and Scully's relationship or working style, but I'm pretty, pretty sure it was never like this. I mean, Alex was a football hooligan and Dolores was a Hispanic gang member, and neither of them finished their schooling, both of them going to prison rather than college, so we're not going to see a patient FBI-style investigation. And they both like hitting and shooting people. So there's a subtle difference there, I think. Just a little one. But they do have to keep their heads while all around, people are losing theirs (literally? I'm not saying). And there's something quite interesting about the relationship between Alex and Dolores - and no, it's not that. Because I know how your brain works, and I can tell you now that you're wrong. Just wrong, okay? I can't say any more even though I'm itching to, so you'll just have to read it and see.

And I have to mention a couple of other key characters, like Ricardo, the phlegmatic Guatemalan policeman, and Father Banos, the ex-gangbanger-turned-priest. But that's just a taste, so I won't elaborate further.

So is that not enough? No? Okay, okay - *sigh* - there is a lot of action. Many, many people get killed. And maimed. Possibly mutilated. Depending on how you define mutilated as opposed to maimed. But the body count remains high - this is an X-Troop novel - and... agh, just read the damn thing.

It's available at Amazon and Amazon UK, and for the next couple of weeks it'll be dirt cheap, so get your sweaty mitts on it while you can. And if that's not enough, then next week I might just do a post on Mayan mysteries and the myths that surround them. Time permitting of course. But hopefully, I'll see you then. In the meantime, enjoy!
at March 21, 2014