A Celebration of Violence 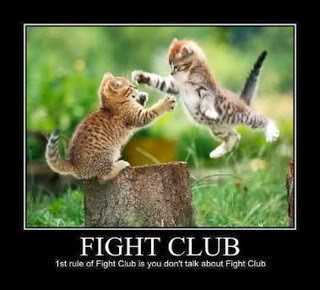 I have a confession to make. I glorify violence. How do I do that? Well, I make it an essential part of the hero's journey.

I make it essential in that, without it, the hero cannot complete their mission. It must be done either by the hero, or on behalf of the hero. It is a situation whereby violence is the solution, or a vital part of the solution, to the problem.

For instance, a Mrs Marple or Poirot mystery would not count. The story may contain violence in it (like when the murder victim is killed), but the means by which the perpretator is caught owes nothing at all to violence. The detectives in question only use their powers of detecting, whatever they may be. A Sherlock Holmes story, on the other hand, may well glorify violence, since occasionally Holmes or his trusty armed sidekick, Watson, must resort to violence to move the case onwards or solve it.

Some authors try to shift the responsibility from their heroes so as to make them seem a little more moral, and less violent. You know, in order not to glorify violence. The Russian detective Arkady, in Martin Cruz Smith's novels, makes a point (after the first novel) of never carrying a gun. Other characters in the stories even question the wisdom of this, but he remains stubborn. He appears moral in this regard - the antithesis of the all-action hero who relies on his fists rather than his brain. Yet Arkady, in spite of being unarmed, continues to wade into dangerous situations, against all advice, and ends up confronting violent people anyway. And when he does, he nearly always relies on others to use violence on his behalf, thus allowing him to solve the case and bring the story to a satisfying conclusion. His morality, therefore, is bogus, because he still needs violence to solve his problems. The author ensures that he benefits directly from violence done on his behalf (in one novel he even has to rely on a child shooting his enemy for him), even though his own attempts to fight almost always fail, because he's not a very good fighter. But he still keeps getting himself into situations where he needs a good fighter - or a good shot - to save the day. So he's not really the anti-hero that he appears to be, and the Arkady novels (which I thoroughly recommend, by the way) are also, in their way, a celebration of violence. Without it, he'd be dead and his cases would be unsolved.

The glorification of violence has many critics. Quentin Tarantino, for instance, got a lot of stick for it in his last movie, Django, and he got very exasperated during interviews because of his reputation of making violent movies. 'Why the constant violence?' his critics seem to be saying. How about giving us something that doesn't involve all that ugly, physical stuff?

There are a lot of stupid assumptions about what the glorification of violence really means. Josh Whedon, for example, that ever so nice man who empowers women in his movies, is never accused of glorifying violence. I mean, he's so kind and thoughtful, and so in touch with his feminine side. He doesn't do the gut wrenching bloody scenes that Tarantino prefers to let the camera linger over.

As Mal from Firefly would say, "He's my hewo."

But let's go back to my definition of what glorification of violence means: an essential part of the hero's journey... without it, the hero cannot complete their mission.


There doesn't have to be blood involved. Nor even a single sneering face. Buffy the Vampire slayer was a celebration of violence. So was Firefly (another one I recommend). And the Marvel movie he wrote and directed? You bet it was.


Any action story, no matter how sugar-coated or dialled down for a younger audience, will likely be a celebration of violence. And many of us enjoy this celebration for its own sake, which puts us on the wrong side of the barrier from campaigners who say that the depiction of violence in our fiction reinforces the violence that already exists in the world and actually makes it worse.