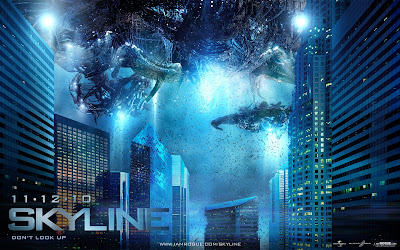 I watched Skyline today. Yes, I know I'm three years too late, but time runs different in the alternate reality that is my brain, because it seems like only yesterday that I remember the movie coming out.

Like Monsters, another movie I discussed not so long ago (five minutes, wasn't it?), it's a low budget affair, set almost entirely in one luxury apartment, with unknown actors and a lot of CGI, and it's divided audiences, who can't agree on whether it's good or bad.

But wait. It wasn't actually a low budget movie at all - it just feels like one. Monsters cost half a million dollars to make, and is testament to what can be achieved with modern techniques and technology. Skyline, on the other hand, cost a mindblowing $20 million to make.


They certainly didn't fork out for a decent scripwriter. The cast, as one reviewer put it, resemble a bunch of swimwear models. Beautiful, bland and dumb as a box of frogs.

The bimbos look shocked and declare, "What are we going to do?"

The beefcakes look shocked and declare, "We gotta do something."

They come up with some really stupid ideas, to which the bimbos reply, "We can't do that."

And that's pretty much the entire plot of the movie.

The film begins with a rich, gun toting hip hop artist throwing a launch party for his friends in L.A. (surely the most alien invaded city in history now). That peaked my interest at first - maybe he'd call all his homies to go out and kick ass. But it goes nowhere and he becomes just another bland character who's going to die soon anyway. And according to the wiki entry, he wasn't a hip hop artist, but manager of a special effects company. My bad, but that just makes it worse anyway.

So they're stuck in this apartment while the city outside is ravaged by aliens that look like they've been ripped straight out of the Matrix movies. Do they start revealing interesting back stories, crushed hopes and dreams, interesting snippets that make you look at them in a different light? No, not at all. They just stare out of the window while the airforce fights a losing battle with the alien motherships. And they stay clueless and stupid for almost the entire movie. You'd think that maybe the director would throw in the reliable cliche about folk pulling together in a crisis, becoming a real group, but the fact is, they never do. They all live urban, individualistic, selfish lives, and when their mobile phones stop working, they're all stuck. One character, who's pregnant, has a tantrum about someone smoking in the apartment. The aliens are devastating the city's inhabitants, but she's still got time to worry about the effects of second-hand smoke. Yes, it really is that petty.

The only other mildly interesting character (apart from the hip hop artist who actually wasn't) is the hispanic apartment complex manager. He doesn't look like a model, and he does appear able to actually think. He certainly gets the best death scene. But looking interesting isn't difficult in that company, and he's largely wasted in the movie.

You kind of look forward to seeing the aliens slaughter such a shallow bunch of idiots. And slaughtered they get, as mankind appears helpless before the alien onslaught.

But then, at the end there's a twist. As the main guy and his pregnant girlfriend make a doomed attempt to escape the fate of their yuppie friends, they are captured and sucked up into the mothership. All appears lost, and the end credits look ready to roll.

Another scene follows, however. The girl wakes up in the bowels of the ship, surrounded by comatose victims. Tentacles pick up her boyfriend and rip his head off, removing his brain for insertion into waiting alien bodies. As he's been infected by something the aliens have done to him earlier in the movie, his brain glows red, unlike the other brains being fed into the tubes. The red brain is inserted into an alien head, and the alien comes to life, with red eyes instead of blue, and looking like he's having trouble with his new brain, like something's gone wrong.

Meanwhile his girlfriend is picked up by the tentacles but spared when they realise she is pregnant. Obviously she's being saved for some sort of breeding program. Suddenly the red eyed alien appears and saves her, fighting the other aliens and carrying her off. The end.

Weird? I'll say so, but it's actually the most original part of the whole movie. I have to assume that the producers have a sequel in mind, where the monster, or alien, with a human soul uses his strength to save the girl and thereby mankind. Or something.

I hate to say it, but Disney has already produced the sequel. It was called Beauty and the Beast. Is that what's being planned next? Somehow I can't see the producers getting funding for that, so we'll perhaps just have to imagine it ourselves.

Or, on the strength of this showing, hope that it never gets made. This really is a movie that you do not want to watch, unless you like unintended comedies. With a few beers and a few of your mates, it could actually be quite funny.