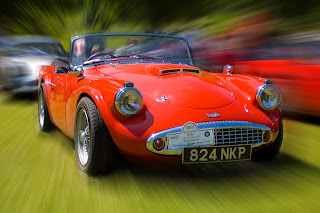 I mentioned in this post, and this post, how the X-Troop series got started: essentially on the back of disillusionment with my previous attempt at a series, and possibly the writing process itself. I got all hung up on being a proper writer, doing things the proper way and a whole bunch of neurotic hangups that really just sabotaged whatever I was doing. A common newbie writer trap, I'm sure. Or maybe not. All I know is that when I finally said, 'fuck that' and just did my own thing, it started to come together a little more harmoniously.

Influences, you see. That was my main stumbling block - and I just couldn't see it.

I was writing science fiction, and science fiction authors that I researched kept going on about their biggest influences - 60's, 70's or 80's written science fiction - and how it shaped their reading lives and, ultimately, writing lives. Writers like the late Iain Banks kept mentioning the importance of knowing the SF 'canon' (with a view to criticising the pesky outsiders who dared to write SF without such vital knowledge). All the Brit SF writers would go on about how they loved SF.

And that was a problem for me. I didn't love SF. I didn't particularly love any genre. I mean, it's just a bunch of books. I love my wife. I love my children. But books are just things that I like to read. I have shelves of them, but I also have shelves of CDs and DVDs. I like to be entertained, and I find some books better than others. The ones I like, I keep, and the ones I don't get given away. I have a couple of favourite authors, but I don't slavishly read everything they've had printed. And I certainly don't love a genre. Some books I liked happened to be science fiction. Most however tend to be scattered randomly among the genres, and I don't care.

I'll certainly never qualify for the die-hard fan in stormtrooper costume at a sci-fi convention. And the thought of queueing for ages to get some author's signature on a book I've purchased strikes me as pointless. I mean, why?

Clearly there was something wrong with me. How could I hope to compete with all those other authors if I didn't have the correct genre gene?

The first adult novels I remember reading were war novels, and for a while I consumed a lot of them, all set in WW2. I enjoyed Len Deighton's war novels and from there I went on to read a few of his spy novels. Eventually I tired of those and gravitated to fantasy novels, sparked probably by the fantasy RPG games I played with my friends, which were a lot of fun. I tried out some science fiction, and then a few crime novels. Then I read spiritual memoirs like Richard Bach's Illusions and The Bridge Across Forever. In between I consumed non-fiction books on psychology, philosophy and history. There was never any pattern, and I don't recall the need to ever stick to one. If I saw something I liked, I'd lurch off in that direction, and that was that.

But while I was struggling over my letters to agents, listing my influences and trying to sound impressive, I forgot what was probably the biggest influence of all on my reading.

From the age of seven I was nose deep into a comic every chance I got. And not the magazine type comic like The Beano or Victor, but stuff by Commando or Battle Picture Weekly: small, self-contained picture novels essentially, not serialised. 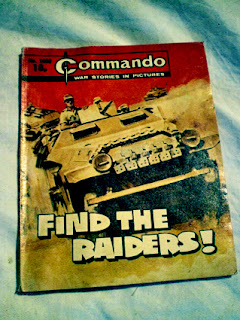 Any chance I got, I'd go to the corner newsagents opposite my house and buy another for 20p. I had drawers full of them. I wish I'd kept a couple, just so I could see what I liked about them, but my parents were keen on throwing them away every chance they got. I think they were disturbed by my geeky insistence on reading them rather than going out to play. I don't know what the fuss was about, as I remember playing out in the streets a lot, but I couldn't get enough of these comics - both for their stories and their graphics. 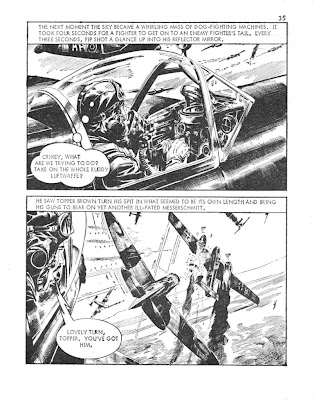 I'd gotten hooked into the visual form of story telling. Not that I was interested in telling stories myself, but I did get into drawing. I drew tanks, planes, battles and, later, spaceships and space battles in competition with a friend who was into that sort of thing. I was never really a great artist, I don't think, and I certainly never went on to study it at college, leaving school instead to work in a textiles factory, but I kept on drawing in my own way, doing cartoons just for the hell of it (and hanging them up in the break room). By then I was reading novels and I didn't really think about those years of influence until just recently, when I completed Amped.

Amped was a big departure for me in writing style. Rather than write tons of description or exposition, as I thought I was meant to, I just wrote scenes, one after another. I didn't bother with chapter headings. When the scene ended, I inserted a line break and then started on the next one. I stayed in one character's POV (point of view) and, after setting the scene briefly, let them tell their story through their actions and dialogue. I resisted the temptation to go too deep into motivations or meanings. I wanted speed and I just surfed straight through to the final scene. Then I went back through it, editing the odd word, then I proofed it (checking grammar and punctuation). And that was that - a completed story.

Not a long story, obviously, and that helped with the speed of the thing, but it was all there the way I wanted it, and I didn't feel the need to pad it out in any way. It was, for me anyway, a liberation. The transfer of the story in my head, straight onto paper (so to speak), with no distractions or hangups. And in the new age of ebooks, I could publish it straight away, without some agent saying it wasn't long enough.

I had essentially written, in literary form, a comic book.

I didn't realise it at the time, of course, and when I started X-Troop, I wondered if I really should be tackling a longer story in the same way. It felt like I was bucking a trend or breaking some rules - you know, doing something wrong.

Did I mention that self-doubt is one of the most common traits of a writer?

Anyway, while I was mulling this over, I walked into a specialist comic shop. Adult comics - wall to wall superhero stories. I've never been into superheroes myself, so I wasn't sure what I'd get out of the experience, but it turned out that there were many crime and thriller comics too, and as I browsed through them, I realised that the story style was similar, albeit in picture form, to what I'd just written in Amped. And that's when the light bulb came on over my head. The clouds parted, the angels sang, and I remembered, finally, my true story heritage.

One comic that caught my eye was The Boys. 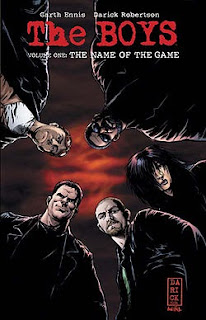 I can't say too much about the contents, as it was £15 (a far cry from 20p) and I couldn't really afford it, but it seemed to involve the 'boys' beating up a lot of caped superheroes. All in a good cause, I'm sure. But I liked the look of it, and all worries about writing X-Troop in the same breathless comic style pretty well vanished. A visual, fast moving narrative would be fine after all. 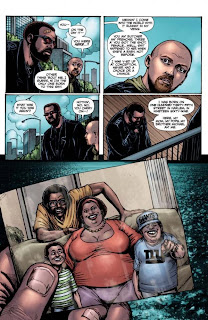 Are Alex Harvey and his lads based on the 'boys'? Not really, as I'd dreamed them up already, but I think The Boys certainly gave me the confidence to stick to the story, from a bruiser's point of view. I stopped worrying about whether it was right for the science fiction market, or female readers, or whatever. I also stopped worrying about whether it was too shallow, relying on such a visual, fast paced style. In the end, none of that mattered. Readers who like deeper, slower works will always find them elsewhere, and worrying about it certainly didn't help my first aborted series.

I got into writing for the same reason I got into reading - to get away from the mundane life of school and crap jobs. I get inspiration from reading books, but I also get inspiration from art - a lot more than I realised. I think in pictures. One of the biggest challenges for a new writer is finding their own 'voice'. We all start by mimicking the styles of authors we like. It just took longer than it should have to realise that my 'voice' is visual rather than verbal. It's the voice I think in. I still can't draw it. But I can write it.

When it comes down to it, I just love art. 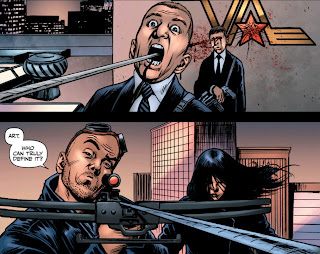 And if you're interested in The Boys, I've just found it on Amazon and Amazon UK for a lot less than fifteen quid. I think I may be getting a copy myself after all. Enjoy.
at July 02, 2013