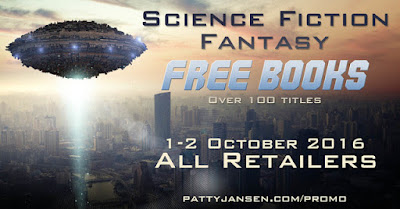 There's a great new promotion happening this weekend. Over a hundred science fiction and fantasy books being given away for free! From unknowns to bestsellers, this is a fantastic way to discover and try out new authors, and it will cost you nothing, nada, zip.
With so much on offer, there's bound to be at least one book that catches your eye, so add it to your library while you can. Tons of action, mystery, romance and even some box sets, and it's available for Kindle, Nook, Kobo and Apple readers.
Did I mention it was free? Yes, free stuff. Grab. Read. Enjoy. 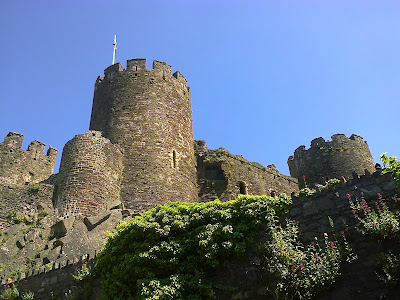 Imagine, if you will, that you are on the run from zombies. The world has gone to hell, you are with a group of survivors and you need to find a place to hole up. Somewhere defensible, somewhere safe from the clawing hands and the bared, blood covered teeth of the undead hordes. Then you come across a castle. 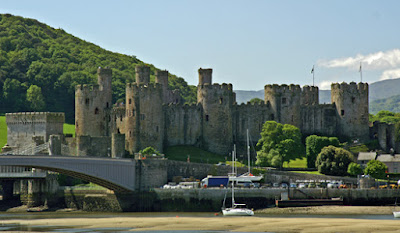 But not just any castle. Conwy Castle, with its intact walls and towers, and an accompanying town that has its own defensive walls - again, still intact - and one of the few places in Europe that hasn't lost them to the ravages of time. 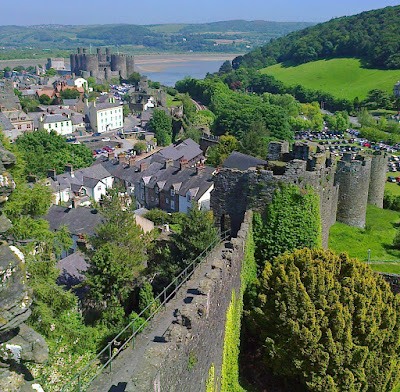 Nestled in the Welsh hills, on the banks of the River Conwy, the castle and its walled town sits ready to welcome any and all survivors who can get there. Mentioned briefly in Max Brooks' blockbuster novel, World War Z, it's one of the key locations for my novel, Remember Me Dead. It should be an ideal location for a strong group, with military assistance, to begin the fightback against the undead. I mean, what could possibly go wrong with such a fantastic location like that?

I don't want to drop too many spoilers for anyone who hasn't read the book yet, but I will give you a little tour, and some of its history, because it's too awesome not to.

Conwy Castle was built between 1283 and 1289 by King Edward I as part of his campaign to subdue the rebellious Welsh princes. The King was himself besieged by the Welsh at the castle, but the garrison was easily re-supplied by river, the sea being only half a mile away, and the Welsh failed to take the castle. In later centuries the castle was neglected, as was often the case with these fortresses, with repairs and maintenance falling behind the structure's actual needs. In 1401, the castle was taken in a surprise attack by the Welsh, who tricked the night watchmen to let them in. There probably wasn't much of a garrison there, if at all. The invaders were themselves besieged and held out for three months before surrendering. By the 19th Century, the castle was an empty shell, with one of the towers having partially collapsed, and it was considered a romantic place by poets and painters. 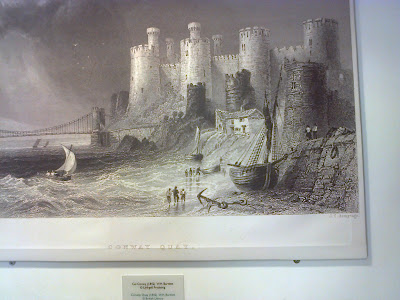 There are many reasons for this castle being an ideal place to fortify during a zombie apocalypse, but I did have to take liberties with reality. The castle, for instance, doesn't have a wooden gate, because it probably rotted away over the centuries and was never replaced. But in my story, it does, because it was easier to trying to explain an alternative. I mentioned two bridges across the river, whereas it actually has three: the road bridge, the rail bridge, and a pedestrian suspension bridge that was built by Thomas Telford, with fake towers to match the castle architecture. 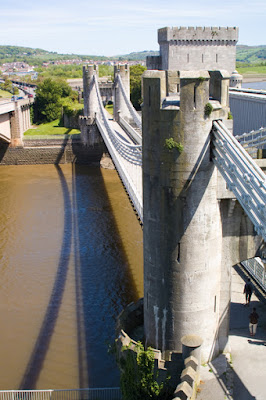 The rail line does, however, run right by the castle walls, as detailed in the story. 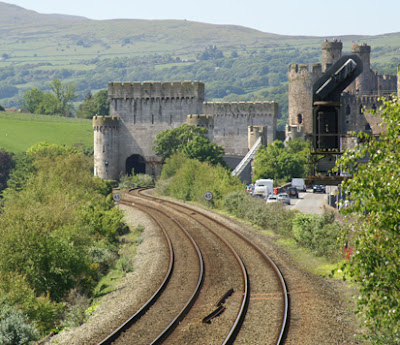 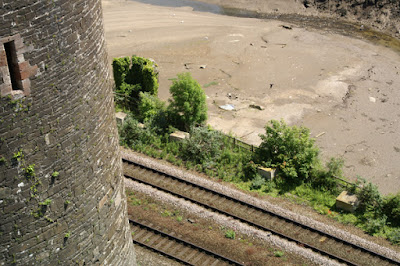 The interior of the castle is more or less as described, and yes, most of the towers are hollow, their wooden floors now gone. 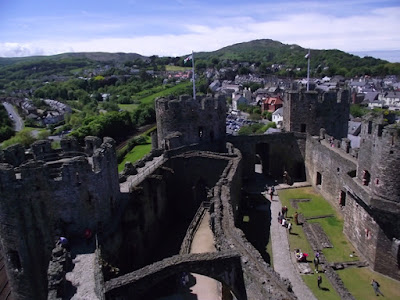 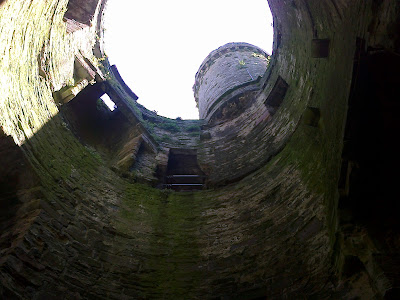 And the railway line does enter the town through a Victorian-era arch: 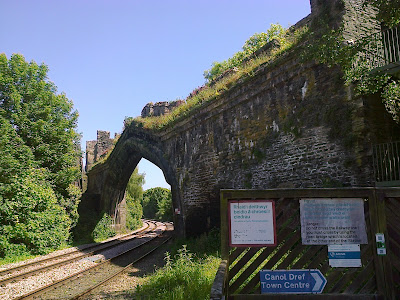 You can explore the whole site from the air in google maps (hopefully embedded below), and I'll throw in some more photos I took at the site. I've visited this site three times with my children, and walked all the walls. If I squint hard enough, I can just about picture the light falling at the end of day, and the sigh of the breeze being replaced by the groans of the undead as they make another nightly attempt to break down the gate. 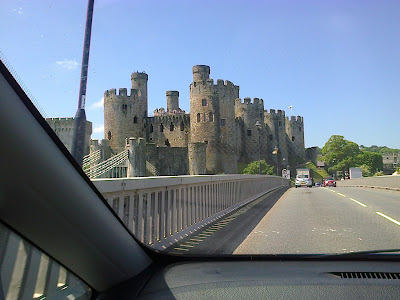 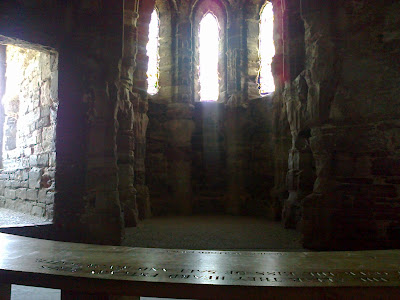 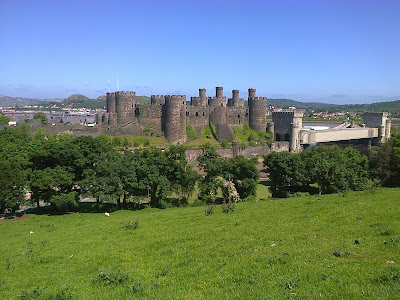 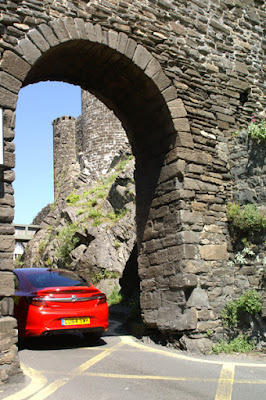 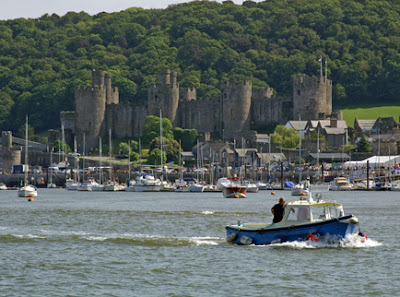 In the light of the Lionel Shriver controversy, I was reading a post on a writer's forum with increasing disbelief, as a white writer basically begged for advice on how to write black people into her story, because she didn't want to be seen as culturally appropriating black culture. Other writers defended the concept of cultural appropriation, where the dominant white culture is criticised for its audacity to do 'black' things like rapping or wearing corn-rows, and Lionel Shriver has already been criticised for saying there's nothing wrong with a white author creating a story from a black character's perspective. Student Unions in the UK have already hit the headlines for banning sombreros or Native American headdresses at parties, because it's 'offensive', and a blatant example of cultural appropriation, so this kind of thing is all the rage at the moment.

I can't stand this kind of sectarian finger wagging, and the post on the writer's forum made me increasingly angry, so I wrote a rebuttal. Considering the outrage at Lionel Shriver's speech, it probably won't be received well, for you have to watch what you say in society today, but that's just the way it is.

And I don't give a fuck anyway. So here's what I wrote:

Wow. So the experience of a black or brown person is sacrosanct and at risk of being defiled or dishonoured if written about by a white person? Oh dear, I included a Hispanic lesbian in one of my books (¡Dios mio!) before I realised the importance of this whole cultural appropriation thing. Oh my God, I even wrote a whole book where AN ENTIRE SPACE COLONY was Latin American. As a privileged British writer (because I've never suffered from the power structures of the dominant WASP empire in the same way as Mexicans or Venezuelans have) I'll surely burn in hell for that (and it will be a Protestant hell).

And I was planning to have a black African protagonist in my next book. Such folly! Such breath-taking arrogance! Wow, I should be careful, and tread warily. I should check my privilege. I should understand that I'm not looking at this character as one human to another (what was I thinking!?), but as a member of a colonial elite looking down on a member of a race who have been historically wronged. And I should write in a way so as to atone for, and correct, that wrong. Am I right?

I need to consult with black African people (black Americans clearly wouldn't understand), and gain some as beta readers. Apparently I even need to find an editor of the same race in order to be doing the right thing. Is there a committee I can apply to for this?

Clearly the dividing lines between the races are so rigid, and so precious, that I simply should not bother. The boundaries that separate the races of the world should not be transgressed. Perhaps, from now on, I should excise all people of colour from my books, because I can't afford a black, brown, or even slightly off-white editor. Because what business is it of mine to try to portray these people? How arrogant it would be of me to even think that I could depict what these people say or do in a fictional story, because clearly they are not the same as me, and they think differently to me. And act and do things differently to me too. Because they are different.

And I should stop eating kale immediately.

But why stop there? The protagonist in my last novel was gay. And in my current work in progress, he's still gay! Have I not learned? How can I possibly know, as a straight person of Celtic descent, what a gay man of Saxon descent feels like? How dare I appropriate that experience for the sordid deed of writing a commercial novel?

Fortunately, I have not written a female protagonist yet. After listening for years to people saying that male writers need to write more strong female characters into their stories, I was on the verge of doing so. What a mistake that would have been. I would have been guilty of Gender Appropriation (this will be a thing soon, I predict). I guess I learned my lesson just in time. No women in my novels then, except as minor neutral characters, so as not to offend anyone or abuse my male privilege.

And I think committees need to be set up - one for women, one for LGBT+ people. And one for people of colour (though by the time one is set up, that name will be considered derogatory too, so a new one will be needed). And we writers can send them our works, for a fee (reparation, you understand), to have them vet our fiction so that it's appropriate for right-thinking consumption.

Maybe a supreme Culture Committee can be set up that can vet or veto any work that fails to meet strict standards (for what is culture without standards). And they can put me in a holding pattern if there's a deficiency in gay, black or women writers that month, so as to ensure crystal clear equality.

But then, if I wanted to have my every thought or creation monitored and controlled, I'd have stayed at school. So, at the risk of offending (or oppressing) half of the world, I shall continue to write what the hell I like, because it pleases me to. And it's not difficult, because I'm writing about people. And I'm a person too. And as a  fiction writer, I transgress boundaries all the time, because they don't exist for me. And as a brown faced Spanish kid fleeing English racists on his street, I never understood what was so important about creating those boundaries, unless it was just another excuse to hate.

The whole concept of Cultural Appropriation is racist (or racialist, as it used to be more correctly known). The forced division of humanity by skin colour is racist. The championing and celebration of these divisions is sectarian. Sectarianism (on the rise these days) never united anyone, because sectarianism is designed for conflict, and the people who engage in it are only interested in conflict.

And I never liked kale anyway. 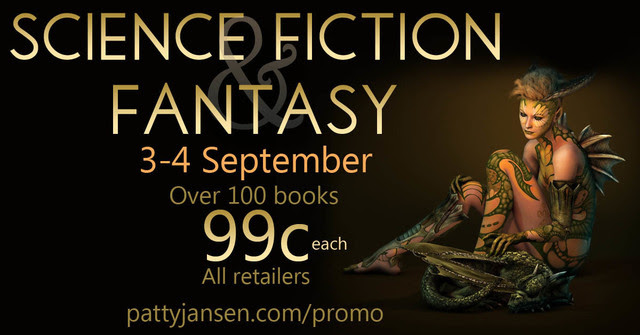 This weekend you get the chance to choose from over a hundred books and authors, thanks to a massive promo by author Patty Jansen. In cooperation with many other authors, she's offering readers the chance to buy science fiction, fantasy and horror books on the cheap, for two days only. So if you fancy a new read, check it out. With so many books to offer, you're bound to find something you'll like.