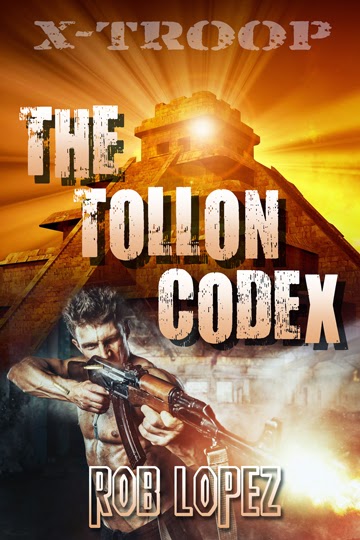 Get a free download of the third book in the X-Troop series, available on Amazon from 10th Feb to the 14th Feb. What better way to treat your loved one on Valentine's day than with a tale of ripped warriors, aliens and Mayan ruins? No? Well, you could attempt to pass the kindle across, hidden discreetly under a box of chocolates. And flowers. I've heard that works too. But, if for some bizarre reason (I know, I know) that tale of romantic Mayan legends, passionate mountain jungles and a seriously high body count fails to do the trick, you'll know at least that it didn't cost you anything. Well, except for a complete lack of sex that evening, but hey, don't say I didn't warn you.

We've heard all the usual complaints about ebooks and Amazon forcing small bookstores to close, driving traditional publishers to the wall. There's been a lot of hand-wringing about how an ereader cannot replace a paperback because the paper feels so nice to touch, the book feels more substantial - so you feel you are reading something of worth - and it's easier to gift a book than an ebook. Every year, it seems, someone in an article rejoices at the fall in ebook sales that, for some reason, never actually happens. And many people cannot wait for the Indie publishing phenomenon to finally collapse under the weight of its own crap, so that readers can return to the protective bosom of the professional publisher, certain at last of being able to read a 'quality' book that is free of typos and poor plots. We've heard it all before, and since I wrote on this subject three years ago in Dinosaurs Ate My Ebook, nothing much has happened to change my mind on this. All we've seen is a Groundhog Day of whinging. And if you are an American reader and you're wondering... yes, to whinge means to complain. Peevishly. A lot.

The biggest complaint about the effect of the electronic revolution on publishing focuses on the loss of jobs - the poor girl behind the bookstore counter, the poor guy standing by the printing press, the poor editor sitting behind the desk: all waiting for the customers to validate their existence, and all waiting in vain because some evil corporate bastard in Amazon has stolen their trade, their livelihood and their sense of self-worth. Oh no, isn't new technology awful? Which is odd, because the printing press was also considered to be new technology in its day, and condemned by moralists and establishment figures alike. But now we look back on the birth of the printing press and celebrate it for its contribution to democracy. So, apart from cheap (and free) books, what else has the ebook revolution brought to society today?

Here's one interesting thing that ebooks have brought to society: Jobs.

Okay, considering all the jobs that have been lost in the publishing industry in the past few years, that might seem a strange thing to say, but it's true, and it's all down to Indie publishing. Now, Indie publishing is a fairly simple phenomena to examine. Basically, anyone with a computer can now write a book, create a cover on Photoshop, write a blurb, and upload it to Amazon, Apple or Barnes and Noble. And because they no longer need the approval of an agent or editor to publish, lots of people have rushed forward to take advantage of this. Which sounds nice but, in the real world, we know it's not that easy. Editing a book takes time and skill, not everyone has the talent to create a good cover, and in order to sell the book to lots of readers, one has to find a way of reaching those readers. A successful Indie writer has to be a good writer, a good editor, a good artist and a good marketeer. That's asking a lot, and of course, the editing, artwork and marketing used to be handled exclusively by professional publishers. But not anymore.

Since the beginning of the Indie writing phenomenon, I have watched the massive growth in the market for freelance cover artists, freelance editors and marketing websites, all catering to the needs of the Indie writer. Self-published writers now invest thousands of dollars in this new growth industry. Hundreds of artists, for instance, now have to chance to sell their work in a way they did not before. Many small marketing websites, operating from people's bedrooms and offering readers news on the latest free ebooks, have grown into moderate businesses that now need to employ staff and programmers. All over the internet, there are people making a living offering their services as editors and formatters to Indie writers and, over the past three years, their numbers have been growing.

And who has benefited the most from this phenomenon? Women.

Yes, and it's strange that, considering how fashionable it is these days to laud anything to do with women, few have commented on the boost that Indie publishing has given to women. The majority of Indie writers are women, just as the majority of readers are women. There is no need now to worry about whether the patriarchal, misogynist, blah blah publishing industry is promoting enough female writers, because women can now reach out directly to their readers, working from home, working flexible hours, being their own boss. They can run their own businesses now, from home, while raising children, balancing the demands of work and home, as the mantra goes. And many of them do. Working invisibly, and often under pseudonyms, thousands of them are now writing and publishing from the comfort of their own computer, all over the world. And the ones that aren't are setting up websites offering their art, their networking skills and their advice.

The liberal intelligentsia are usually the first to praise women's empowerment, just as they enthuse about crowdsourcing, anti-government demonstrations and anything else they perceive as involving the mass democracy of individuals and their heroic struggle against authority and corporations. They have praised the efforts of Indie musicians and Indie film makers. But when it comes to Indie writers, they are strangely reticent, looking a little uncomfortable with this freedom of people being able to publish whatever they want. They will praise free speech and blogging, but they rarely praise self-publishing. They will name-drop the latest Indie songs or Indie movie they enjoyed the day before, but when it comes to Indie writing, most of them are firmly on the side of the traditional publishers, which just goes to show how shallow their notion of liberalism really is.

Many self-professed liberals think that liberalism is merely the enunciation of bourgeois good manners. All they feel they have to do is mindlessly follow the latest liberal fads of diversity, multiculturalism, women's rights, gay marriage and feeling sorry for African children, and that is that: no further thought required. They're wankers, basically, marinating in their own sense of moral goodness. The truth is, most have not the faintest idea what liberalism really is, and while they are liberal about democratic freedoms, they are conservative and blinkered about self-publishing.

Hypocrisy is as old as society. So are the effects of technology on that society. But really, the only thing that has changed about publishing is that more people are now doing it. When pound shops and dollar stores appeared on the high street, did people complain that they would dilute the quality of the retail world? No. Customers aren't stupid. They know how to shop around, and they know what they want. It's the same with Indie publishing. Yes, there's a lot more crap out there now - that's a statistical inevitability - but readers can tell what they like and what they don't. They don't need anyone to hold their hand, and neither do writers, who can now purchase whatever freelance expertise they want.

Indie publishing is not going to die - it is not a bubble waiting to burst - because there are now too many people involved in it, all interlocked and adapting to every change in the market place. It's the chaos principle in action, and it's worth watching because, really, it's better than whinging.
at February 04, 2015 No comments: