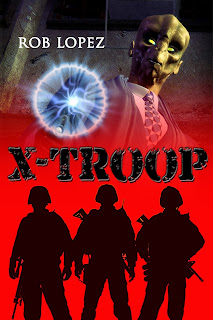 The new book is out! The second story in the X-Troop series, called, as you can see, er, X-Troop. That's going to look odd on Amazon as it will be listed as X-Troop (X-Troop). No matter. It's a 40,000 word novella, compared to the teaser Amped which was 17,000, and it sets the tone for the rest of the series as Alex and his boys go into action against the alien threat. Lots of action, squaddie humour and aliens being sent back home in body bags.

And as we say hello to a new story, we say goodbye to an old one, for Even The Dead Dance To Live, my first self-published novel, has now been taken off the market. Why? Because it wasn't really the book I wanted to write.

Let me explain. When I first wrote Even The Dead, I'd never heard of self-publishing, and I was geared to selling it to agents and publishers in the traditional manner. This was a problem because, as I'm sure you're aware, it's not easy to get your book accepted by a publisher. The general advice is that, when you're making your pitch to them, you compare your work to an established book or author whom they are already publishing. It's common sense really. Publishers take a financial risk every time they accept a previously unpublished author, and they will naturally filter out any request along the lines of, 'this original work is like nothing you've ever printed before'. Straight into the bin with you, my friend. Life's too short and money's too tight to take too many risks in the publishing business - or any at all, in fact. So for me, as a sci-fi writer trying to get into the Brit SF market (which is where I had to start), I had to look hard at novels by the likes of Iain Banks, Paul McAuley, Peter Hamilton, Richard Morgan, etc. And attempt to emulate them.

Or so I thought.

The only probem was, these guys weren't my primary influence. More on that later.

Anyway, when I wrote that story, I didn't really think about the story on its own, but rather what commercial framework that story would fit in. I tied myself up in a lot of knots over that one. The original story I had was a kind of Firefly/Star Wars mix, but that kind of stuff was, by then, considered too fantasy and seriously out of fashion. I pored over the SF boards on the net, and there was a lot of talk about 'hard science', plausibility, technological impact on future society and a whole lot of other stuff that, in retrospect, was actually just sniffy posturing. But I took it on board and tried to reshape my fantasy sci-fi into more serious SF. I researched tons of science so I could keep up with the opposition (Alastair Reynolds and Paul McAuley were both scientists) and twisted the story round so that it would be grounded in scientific questions. I lengthened the story so it would match the standard 100,000 word expectations of a publisher, and for this I had to invent new subplots, new characters and acres of padding, when what I really wanted to do was get on with the original story at breathtaking speed. The resulting monster was 130,000 words long and looked, to my eyes, like I'd taken a sports car and hitched a caravan to it. Subsequent rewrites to get it 'correct' for the 'market' added a luggage box, an extra row of seating and a sensible beige paint job. The only thing that prevented me from adding even more was sheer exhaustion. I'd had enough of the process, so I put it out as it was, but I was never entirely comfortable with it. I was in too deep to understand why, though.

Needless to say, the agents and publishers all turned it down (or simply never replied), so I then went through the whole self-publishing learning curve and put it out, to a rather unenthusiastic response. It got some nice reviews, and a few people may genuinely have liked it, but I know of several who started it but then never finished it, and many, I'm sure, were too polite to give me their real opinion on it. But the ultimate test is the market, and the readers voted with their feet. Even The Dead languished for months, dead in the water and with barely a spark of interest. That's when I realised I'd spent years going in the wrong direction.

It wasn't a complete waste of time. Pushing your boundaries never is, and I learned a lot from the process. I consider it to be my apprenticeship. But the fact was, my baby had spent too long in the mutant vat and had come out all misshapen; a bunch of killer scenes and interesting characters rubbing shoulders with dullards, spiralling counter-plots and way too much filler. What it needs now is to be stripped down, cleaned and oiled, with all the dead weight removed and a V8 supercharger added. And a new, funkier paint job. But that's for the future. Pull a cover over it and roll it into the corner of the garage, because X-Troop is on the ramp now, its exhaust growling sweetly and about to enter its first time trials.

Or sales trials. You know what I mean, roll with me on this.

So what's this new beast like? Well, read the sample or buy the book to find out. I mean, you're not going to take my word for it, are you? Take it on the road and give it a test drive. But if you want a peek behind the scenes (like a DVD extra I guess) to see it with the covers off, spark plugs and all, then stay tuned (no pun intended) for my next blog post, where I'll be exploring the book's influences and inception.