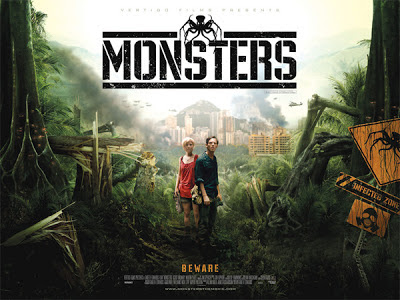 A friend lent me this movie. He said, "A lot of people didn't like it, but I really enjoyed it."

I went away, thinking, "Hmmm, it's probably shit then." I checked out the reviews on Amazon, and found opinion split down the middle, from 'I found it really beautiful' to 'It's crap! Nothing happens in it!'

I left it on my shelf for about a month and a half.

When I finally got round to watching it, my expectations were suitably low, and if you're planning to watch it too, then I recommend you do the same. It's a low budget flick - a project where the Director/Producer/Writer Gareth Edwards took a crew of six, plus two actors, on a road trip through Mexico and Guatemala and filmed a rambling movie.

A disaster waiting to happen? It sounds like it, doesn't it? There were no other actors involved - they just paid whatever passing local person they could find and gave them some lines to say. And all the special effects were inserted digitally afterwards by the Producer/Director/Writer, who was in fact a special effects man by trade, with no previous full-length movie producing experience. The plot involves two people in a journey from A to B, the ending is abrupt, and there was clearly a lot of improvisation involved, with many questions left unanswered. And considering that it's an alien invasion movie, of sorts, the action quotient is fairly low.

It's no wonder some people hated it.

It's certainly no Independence Day, nor even a District 9.

But I loved it.

To start with, the cinematography was brilliant. Lovely handheld shots of the scenery, very lush, plenty for your eyes to linger over, it was great. The accompanying music then adds layers of atmosphere. And much of the movie is like this - a languid flowing river of atmospheric places with lots of local flavour. In that, it reminded me of the movie Driver, one of my favourite films of recent times. Nothing like it, of course, it's just that they both use the same approach to music. Some reviewers say that nothing happens, but to me every frame was eye-candy, so as far as I was concerned, something was happening all the time, and I'd often rewind sections so I could see them happen again.

The basic story - of a journalist who has to escort his boss's daughter out of Mexico and through the alien-devastated zone - is simply told. You don't get masses of dialogue, which would only ruin the mood anyway. A few lines in the opening credits tell you where the alien creatures came from and why they now 'infect' the American/Mexican border area, and then it's just a line here or a sign there that tells the rest of the story. The story is low key, and the acting is low key, and authentic where it counts.

Well, no. Again, some reviewers complained that you hardly saw the 'monsters'. I don't understand what movie they watched, because you see the monsters quite a few times. Maybe they were expecting them to be given lines, I don't know. And although it's a languid movie, stuff does happen. Shots get fired, people die, the two characters have to flee or hide, etc. My favourite scene is the 'fin' that appears in the river, which turns out to be the surfacing hull of a crashed fighter jet. Then, while everyone's watching it from the boat, relieved that it wasn't a monster, a set of tentacles rises from the water and pulls the plane back under.

The effects in this, for such a low budget movie, are brilliant. The tanks, jets, helicopters, ruined buildings, mountains, even the signs by the roadside, all fantastically done in a way that adds to the enjoyment of the movie. Some people, I know, moan about too much CGI - some people moan about anything - but I don't see what the fuss is all about. If it works, it works, and in this case, it does.

Some of the storytelling is a bit lacklustre - as a writer I can't help but notice that. For instance, the ending appears quite abrupt and a bit pointless. Like a lot of arty, low budget movies, in fact. It wasn't until I watched it again with the commentary on that I discovered that the opening action scene - featuring monster and shooting - was actually the ending. Judging from the reviews, I don't think I'm the only one who missed that. The addition of a 'x days before' subtitle before the next scene would have helped, especially as the next scene appeared to be a seamless transition from the one before. Neat, but also confusing. It's also never made clear what the boss's daughter is doing in Mexico in the first place, or why she's got a bandage on her wrist. Some things have to be guessed at.

But the movie was still a delight to watch, and the DVD extras on how the movie was made double the enjoyment, in my opinion. Does the movie have a deeper meaning or message, as some have claimed? No. It really was just made up as it went along and, as a writer, I can relate to that.

My verdict? Simple. Visual. Enjoyment. That's it. My advice? Don't watch this movie, it's crap. If you take that on board, you might then actually enjoy it, rather than be disappointed that it wasn't something else.
at June 13, 2013 No comments: