The Story of a Story 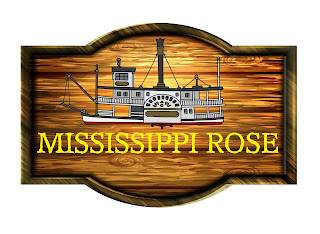 Every story has a story, and this is the story of the boat that almost never sailed, and the story that almost wasn't written. In two days, my new novel Into Darkness goes live, which is a great relief as I can honestly say this is the most difficult project I've tackled of late.
I began publishing back in 2012, and I assumed that as I got better, writing would get easier. I mean, nothing could be more difficult than your first novel, right? Wrong. The writing gets better, but you set higher standards for yourself. And that initial stock of story ideas, usually inspired by everything you've read or watched up to that point in your life, runs out. Now you're on your own. Fast forward to 2020, and as I start writing Into Darkness I discover just how far from my comfort zone I am. I knew a little about Louisiana and New Orleans, but not enough to convincingly set a story there. I thought I knew enough about the Mississippi River (it's just water, right?), but as Darla, the protagonist, knows the river like the back of her hand, I realized I needed to know a lot more.
And steamboats. I needed to know about steamboats. Do you know how difficult it is to get real details of a working Mississippi steamboat beyond its ability to float and the view from the deck? I certainly didn't, and in any other story I might have gotten away with only a passing knowledge of such historical craft. In this story, however, the boat is itself a central character, linked closely to Darla. I won't spoil the plot for you, but suffice to say, I really needed a lot more inside knowledge than I possessed when I started the project.
And finally there was the military aspect. Or rather, the lack of it. In every book I've ever written, the main characters have been military or ex-military. I have studied military matters ever since school, where I used to draw fighter planes and tanks in my notebooks instead of paying attention in class. I'm comfortable with military hardware, history and tactics. In Solar Storm it felt perfectly natural to begin the story in Syria because I'd already studied the conflict there for some years. I'm no expert, but I had a reasonable grasp of how a soldier, even a Special Forces operative, would approach a problem.
Not so Darla. She's an ordinary citizen with zero military experience or training, an unusual background and a very particular personality. You'll understand when you read the story. So I was in uncharted territory and I needed to do a lot more research. In fact, I quit the book, not once, but twice, thinking I didn't really have enough to continue with this. I even began to doubt my own abilities as a writer (as any writer knows, continuous self-doubt is an occupational hazard). And of course, this was 2020. Once Covid hit and things went crazy, many things spiraled out of control.
Still seems crazy to me that the first sign of panic was the mass buying of toilet roll. Not just in the US, but all over Europe. As a writer of post-apocalypse stories, I was very humbled by this. In all my stories, and those of many other writers I know, the apocalypse usually began with the stampede to buy food. How wrong we were. It baffles me still to this day. I mean, preppers tend to focus on calorie intake, potable water and shelter, branching further into self-defense, medical items and leaving luxury non-essentials till last. I never pictured, nor portrayed, a typical prepper sitting in a bunker surrounded by toilet roll! Like, WTF.
So yeah, 2020 was weird and people proved to be even weirder. Getting deep into Darla's world while trying to keep my sanity was taxing, and progress was slow, with the result that the book was not ready in time to publish last year. For this, I apologize. It was not meant to take this long, and I was as disappointed as anyone else, but the fault is all mine.
Still, the book is finished and will be available to read very soon (and if you haven't already, you can read the sample first chapter that I've printed in the post below this one). So what can you expect? Well, a rich story set on one of the most famous rivers in literature, and for that I have to thank the late, great Mark Twain, whose influence runs through the entire novel. He not only wrote about it, he was a riverboat pilot with years of experience in navigating the fickle waters of the Mississippi. River pilots were the elite operatives of their day. I recommend his personal memoir of the period, Life On The Mississippi, which shows exactly what it was like, told with his trademark wit and love of detail.
The other big influence is that of Joseph Conrad's Heart of Darkness, whose title is similar to mine. Coincidence? I think not (don't sue me). The idea of a boat sailing up a great river into a dark continent of chaos seemed perfect for a post-apocalypse EMP novel, and I was surprised it hadn't already been done. Well, my own story changed many times during its creation and it doesn't follow either of the books listed above, but the influences are impossible to deny.
The biggest driver of the entire story, however, is the heroine herself, Captain Darla Jean Griffiths. She's quite unlike any of the main characters I've written before. Conflicted, controversial and headstrong, she carries the story on her back and is worthy of a part in any great novel. I count myself fortunate that she decided to appear in mine.
Check it out now on Amazon.
at January 27, 2021 No comments:

In post-apocalypse America, one woman will become a legend.

Darla Griffiths is a riverboat captain, giving rides to tourists on her steamboat out of New Orleans. When a devastating solar storm cripples the grid and leaves the local nuclear power plant close to meltdown, Darla is one of the few people who can safely evacuate the citizens of New Orleans before it is too late.

But when anarchy reigns and a hurricane threatens the city, Darla and her crew must risk their lives to save others, and Darla will be forced to confront the darkness of her own past, and the deadly secrets that imperil them all.

Into Darkness is the first of a new series of adventures on the Mississippi River from the author of Solar Storm. Contains moderate language and graphic action scenes.

Currently available for pre-order on the above link. Goes live January 29th, just in time for the weekend. Since the pre-order doesn't have the look-inside function, I've included the sample first chapter below.