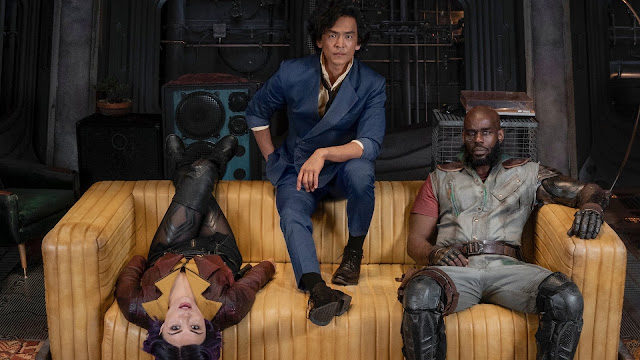 I watched the first five episodes of the Anime version a while back. It was okay but it didn't grab me and I never went back to watch the rest. So when I heard Netflix were releasing a live-action version, I got interested. Seeing all the negative reviews by fanboys of the original interested me more. I'm weird like that.

So far, about ten episodes in, I'm finding this live-action version more accessible. It's gorgeous to look at, tightly scripted and the actors do a really good job. The show's got a lot of heart, I love the chemistry between the main characters and even the side characters do a great job. The world it's set in is a strange blend of sci-fi and old world tech, and the retro elements add to the charm. I'm getting strong Firefly vibes from the characters and story so far, and that can only be a good thing. It's a lot of fun to watch.

Unlike Joss Whedon's Firefly, I hope it gets a second season. And I hope I haven't jinxed it with the comparison. It's obvious that a lot of money and work has gone into making this new version of Cowboy Bebop, and I, for one, want to see it rewarded. It's one of the few things released this year that's actually worth watching.