I promised last week that I'd discuss the Mayan connections in my last novel, The Tollon Codex, so I'll show you now some of the things that influenced the fiction, though it's worth remembering that some of the influences are fiction themselves.

Are you familiar with the Ancient Astronaut theory? This is the belief that aliens landed on Earth many years ago and taught us civilization, because we humans were too thick to work it out ourselves. You see that played out at the beginning of Kubrick's movie 2001: A Space Odyssey, co-written by Arthur C Clarke, when the dumb ape is influenced by The Obelisk to pick up a bone and use it as a tool for the first time. From there it was a short step to the pyramids and smart phones, it seems. Erich von Däniken popularised the idea further with his book Chariots of the Gods, giving us explanations for why the Egyptians and the Aztec/Maya built similar looking pyramids, even though the civilizations never met. Mr Däniken, by the way, is an interesting guy, since he doesn't appear to be an expert in anything at all other than fraud, for which he's been convicted twice, and imprisoned, but that hasn't prevented his ideas from being wildly popular. I mean, it's such a great idea, and it's been used in Stargate, Prometheus and Aliens vs Predators, among other things.

His most enduring idea, however, concerns the Maya and King Pakal's spaceship.

King Pakal was a Mayan ruler who may or may not have been a King - the interpretations are sketchy and, unlike the Aztecs, the Maya did not constitute a single empire, but a series of competing city-states and regions. But King Pakal, whoever he was, was deemed grand enough to get a beautifully carved sarcophogus lid (see image above). I've manually coloured some bits of it for clarity, but this is the image that Mr Däniken claimed was evidence of ancient space travel, since it purports to show the royal personage ascending to the stars in his elaborately ornamented space chariot.

Now you may not have seen this particular image yourself, but the chances are that you will have seen the stuff inspired by it. In Ridley Scott's classic movie Alien, Giger, the famous concept artist and set designer for the movie, was, I believe, inspired by it to create the mysterious 'space jockey': 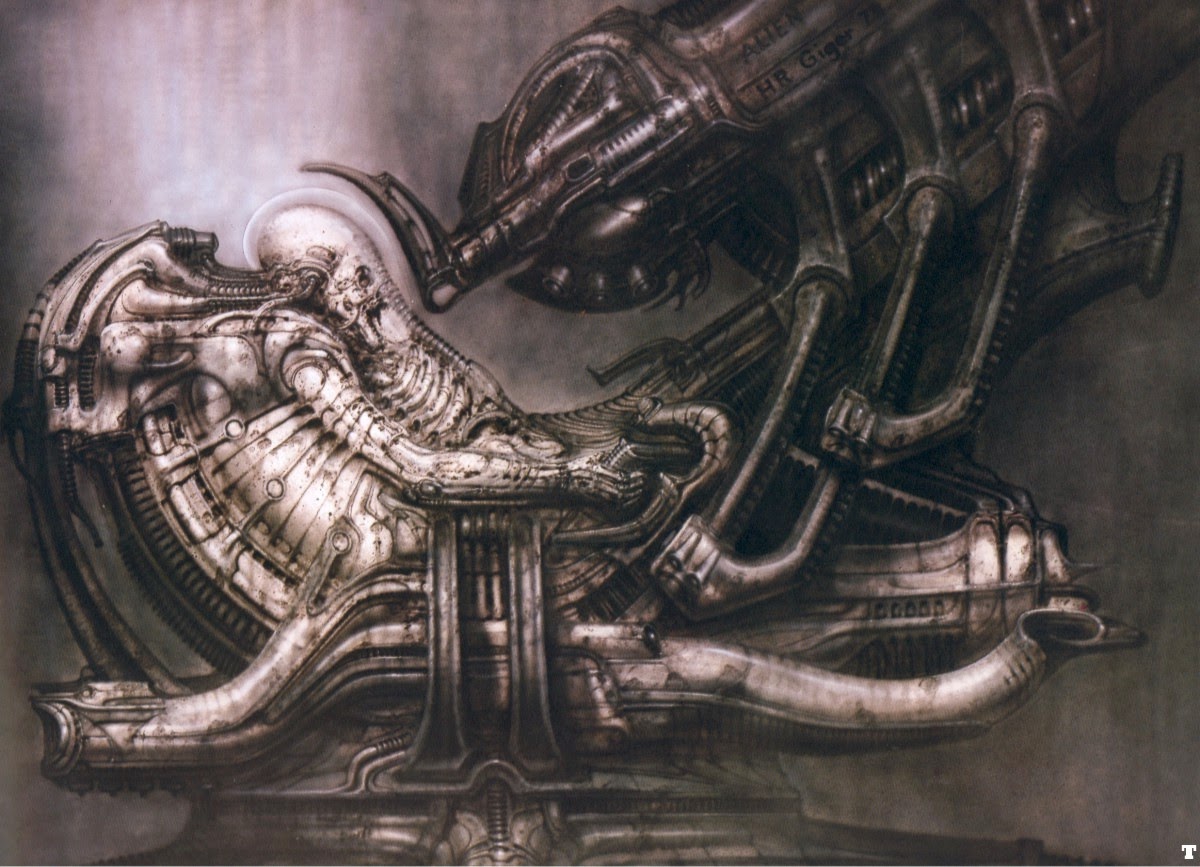 The structure that extends from the seated alien was never explained, and it seemed such a weird thing to have in a futuristic cockpit, but it looked great, and the spectacle was all that mattered. But I think we can thank King Pakal for it.

Ridley Scott wasn't done with the original, however, and so it surfaced again in Prometheus, in a deliberately altered form: 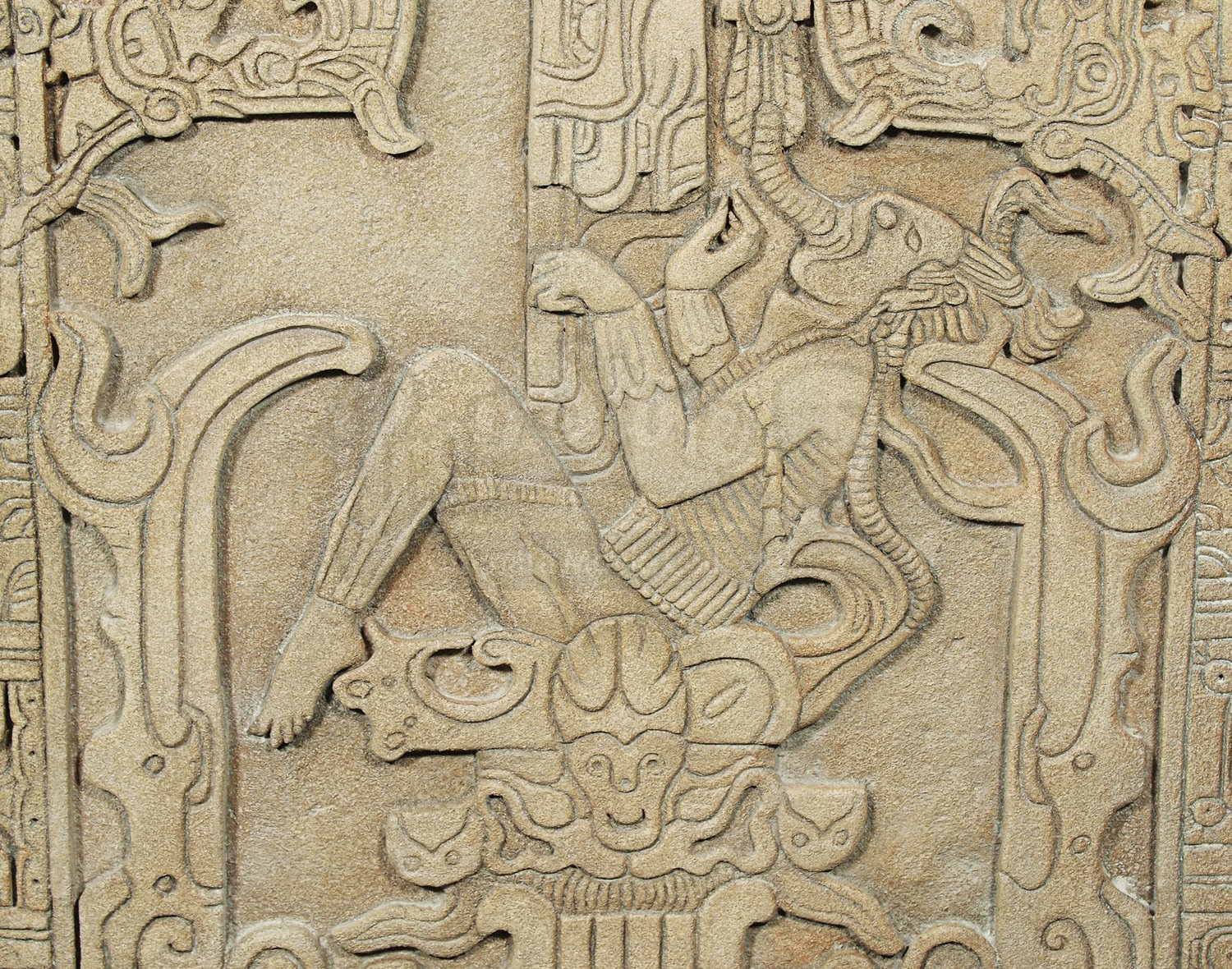 King Pakal gets an air-hose in his mouth to look more like the space jockey in this artful depiction of a Mayan tablet (glimpsed only briefly near the beginning of Prometheus), but the link is obvious, I think.

So, is it really a spaceship? Well, no. That theory's been debunked dozens of times. The image is actually meant to show Pakal descending to the underworld (whose jaws are opening beneath him), with the tree of life (in green) rising from him. That may be the rising of his soul or life force, but so little is truly known about Mayan religion (which varied from one city to the next), that we are left guessing. But the tree of life is a regular motif in Mayan art and appears on its own many times. I'm a science fiction writer, however, not a historical fiction writer, so I'm happy to hammer the wilder version of the myth in my story, though, as you will find, I have added a twist. I like the idea of the tree of life, the thing that connects the Underworld, the Earth and the Heavens. Not read the novel yet? Well, I won't give too much away.

But the bit in the book about the Guatemalan government encouraging the ancient astronaut myth for the sake of tourism? That's not something I completely made up. There's a lot of money in tourism, and it looks like a film-maker and a Mexican government official hoped to cash in with the alleged release of artifacts that 'proved' the link between aliens and Maya. Quite funny really, especially as the film-maker went bust before the film could be made, and the artifacts turned out to be fakes.

I also made use of a dummy called Maximon in the novel, and I didn't make him up either:


Maximon is a popular effigy in local religion, also known as San Simon. He's the patron saint of health, crops, marriage, business, revenge and death. That's quite a combination. But locals build shrines for him and donate cigarettes and gifts as an offering. Then they burn him just before Easter Sunday. You see, he's also associated with Judas Iscariot, perhaps representing the dark side of people's character that must be indulged and then extinguished before the holiest day in the Christian calender. But he pre-dates Christianity and is thought to have originally been the Mayan god Mam (which means grandfather) who was a feared mountain spirit, so there's an interesting fusion of religions going on here.

Then there are the Tzitzimime.

Now these are more nebulous, and are thought to represent Star Demons, but information is sparse on the mythology, possibly because belief in them was not widespread. They are, in fact, an Aztec creation, but I used them anyway, because the existence of Star Demons in a novel about aliens was too attractive an idea to leave alone.

Oddly enough, Mr Däniken made no mention of them when he tried to connect meso-american culture with extra-terrestrial beings. Maybe the research books in the prison library had those pages ripped out for toilet paper. Maybe he was short of toilet paper himself.
at March 30, 2014