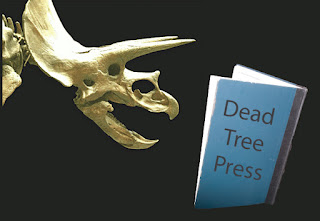 Yay, the digital revolution is here. The era of paper and cardboard books is over and soon everyone will be reading stories on their portable screens. Bookshops will go the same way as record shops and everyone will be carrying 150 novels in their hip pocket along with a month's worth of music listening and a couple of blockbuster movies. We'll also be wearing silver suits, eating three-course meals in a pill and flying around in cars.

The future's a bugger to predict and most predictions are driven by novelty. Once the novelty wears off the future turns out to look only a little different from the past. So it may well be with the advent of ebooks and self-publishing.

Ebooks might be revolutionary, but then so was television and cinema. Accessing a visual story on the big screen is much easier than ploughing through a book and when the medium first appeared there were undoubtedly some who decried the loss of a more thoughtful way of accessing a narrative - and in fact many still do criticise it. But books survived and, against the odds, flourished. Television was also supposed to kill off cinemas, but that didn't happen either. People also continue to watch stage performances, pantomimes and live music recitals. Each offers a different experience and it seems that, rather than replace one with the other, people prefer to have both.

Ebooks are limited in size to whatever e-reader you have. Large hardback coffee table books with lavish illustrations may well live on therefore. They make great gifts and are cheaper than an ipad. An e-reader that is as large as the biggest books would be incredibly expensive and limited in use if you don't fancy lugging it about on the bus.

The future of the paperback novel however may not be so rosy. Once derided by 'serious' readers (and writers) the paperback is now defended as the embodiment of the 'proper' experience of reading. Current generations who grow up addicted to smart phones and tablets may not be so nostalgic however and could well be happy to read (and then delete) bestsellers and pulps whenever they feel the whim. Second-hand bookshops will be the ones to feel the pinch there. Even so, reading a novel on a phone is not always a pleasant experience, especially if they are to remain small enough to be portable, and while hardcore readers will purchase an e-reader or tablet to optimize their reading, occasional readers may not consider the expense worth it for the two books a year that they consume. A paperback novel bought cheaply at the airport may retain its appeal. Whether the printers can keep the cost down for such small print runs remains to be seen. Paperback novels could become flimsy things that fall apart after the first reading - but for the type of reader who doesn't re-read, that probably won't be a problem.

The advent of digital self-publishing introduces even more controversy into the mix. On the one hand there are those who rejoice at this democratic way of bypassing stuffy and inflexible publishing houses and getting straight to the reader, and on the other there are those who say that the market is now being flooded with poorly written and badly edited tat. Both sides are right of course and, paradoxically, both may be presenting us with the future.

First, it is important to understand what 'traditional' publishers are. They are organisations staffed by specialists.

Specialists know their stuff. The real problem facing publishing houses however is that specialists are expensive. When overheads are high and profits are low you cannot afford to have them waste their time if they cannot pay for themselves. This is why publishers reject far more books than they take on because, if they cannot see a surefire profit, they cannot take the risk.

Many of the books that they reject now find their way onto self-published digital platforms, like the ones offered by Amazon and Smashwords. Some of them do quite well, many of them do not.

Another problem for publishers is that they have to wait for creativity to come to them. Writers create the works and then send them to the publishers. A purchasing editor (another specialist) spends an incredible amount of time sifting through all these. Other editors or purchasing teams then have to agree with the original editor's recommendations before they go ahead with the purchase. That's a lot of hours with no direct income generated. And even then there's no guarantee that the book really will sell enough to merit their faith. It's why it's difficult to make a profit in publishing and why so many small publishers have gone out of business.

But that is a problem potentially of the past, when submissions to publishers was the only way for them to view the work.

Now there's self-publishing. Traditional publishers can now wait to see what rises from the froth of 99c ebooks. They can leave it to the market to cull the books that aren't well written enough. They can wait and see which writers grasp the fundamentals of writing and marketing best. Then they can step in and offer the highest sellers a contract, with the idea that, with the help of their specialists, the books can do even better still. And that is already happening, with some best-selling self-published writers being approached by publishers.

In that sense it's very much like the way the popular music industry works (or did work). Young bands had to polish their own craft and book their own gigs to play their music. Reps from the music companies then went out looking for them, booking the ones they thought showed promise. It's not a perfect system by any means, but it has a higher chance of success than just hosting auditions, which is effectively the model the publishing industry has been using.

Publishers can therefore let the writers shoulder the expense of their early development, taking them on only at their more mature (and maturing) stage. All they have to do is follow the buzz. Creating an established readership for a new author has always been the hardest part of publishing. Now they can let the author create the initial readership for publishers to build upon.

Can it work? Who knows?